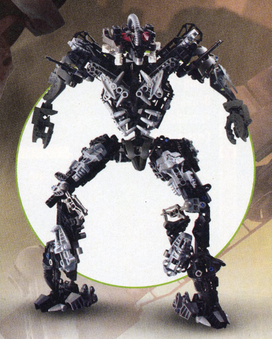 "Devastator" was a Dark Hunter. To hear him tell it, he was one of the most powerful beings in existence after Mata Nui. According to him, the strength of five Toa coursed through his frame, he could breathe fire, create earthquakes, turn his body into living lava, and even summon the dead – or so he said. How much of this was true was unknown. "Devastator" was reported to have emerged from a fiery crag in the barren wastelands of an island not too far south of Metru Nui. According to Matoran legend, it was the domain of Karzahni, a powerful being whose realm was said to be the last stop for incompetent Matoran. Being a native of that realm, "Devastator" was quick to embrace the darkness and more than willing to use his powers to crush anything that caught his attention. He had a habit of turning simple hit-and-run missions into large-scale chaos. "Devastator" could transmute his body to sand, vanish into the ground, and then reappear and strike with rock-hard density. He apparently had strong telekinetic powers and would often rain boulders on a target with his mind before moving in to attack. The list of powers he claimed to have was endless, but there was no proof he had some of them, so they were not worth listing. As of story year 2007, "Devastator" was very active. The Shadowed One had recently dispatched him to a nearby island to collect a payment owed the Dark Hunters by the inhabitants. With luck, there would still be an island there when he was done.1

Devastator was a Dark Hunter.2

Devastator was a huge Dark Hunter, probably close to a ton of mechanical muscle. He was able to knock Toa Nidhiki flying 20 feet with a single blow. In a fight, he had a habit of turning to sand and disappearing into cracks in the floor, or telekinetically hurling objects. Nidhiki noted that Devastator did not talk during a fight. Devastator was strong enough to catch a metal beam hurled at him and bend it in two.3