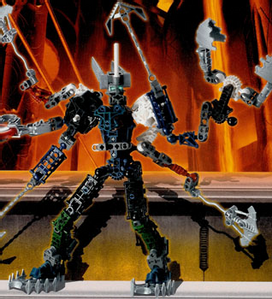 Krahka was an intelligent, shape-shifting Rahi who lived in the area beneath the Archives maintenance tunnels in Metru Nui. Krahka was able to take on the form and powers of any living thing she saw and also to combine these forms and powers. She also gained knowledge with the transformation, enabling her to master the Matoran language, among other things.1

Krahka was a very dangerous Rahi. She defended herself by mimicking the appearance of an enemy, so well that she adapted their powers and abilities, too.2

Krahka could only take the form of those she had encountered. It also took her time to learn the Matoran language; when she first met Vakama, she could only repeat back words he had said to her.2

Krahka could shapeshift into a Rahkshi without a kraata, but her appearance could not fool the acute senses of a real Rahkshi. Rahkshi shied away from Krahka.2

Krahka resented the inhabitants on the surface of Metru Nui who invaded her home with drills, tools, and fires.2

The Krahka could transform by reflex into a gelatinous creature to avoid being hit, allowing opponents to pass right through her.2

In her form that combined all six Toa Metru, the Krahka could combine beams of all six elements together to form solid protodermis.2

Krahka was a female Rahi that lurked in the maintenance tunnels beneath the Archives sublevels. She had the ability to take on the appearance, characteristics, and powers of anything she encountered. As of mid-story year 2004, her whereabouts were unknown.3

Krahka believed for a long time that she was the only member of her species.4 Rahaga Pouks revealed to her that many more Krahka once existed in another land, but that they were overrun by the Visorak and presumed extinct.1, 4

Krahka was an intelligent, shapeshifting Rahi. For years, she lived in the tunnels beneath the Archives. She had the unique ability to change her form into that of any living being she has seen, or any combination of those beings. In the process, she gained the powers of those she imitated, could mimic their voices perfectly, and even gained some of their knowledge. Krahka was capable of speaking and understanding Matoran, forming complex strategies, and successfully deceiving virtually anyone. Only the Rahaga were able to pierce her disguise.4

Pouks remarked that Krahka was a complex, unpredictable creature: savage yet peaceful, capable of both benevolence and evil. He noted that it was impossible to plan a trap for her.4

Krahka lived in the maintenance tunnels beneath the Archives.5

As Krahka was more intelligent than most Rahi, Makuta-level Rahi control powers would have a reduced effect on her.6

Krahka was not a hero, but she was not villainous either. She was somewhere in between, as with most Rahi.7

"Krahka" was the name of the species.8

This individual had always been referred to as "Krahka".9

Krahka could shapeshift into a Makuta if she saw one, and she could use any of a Makuta's powers that she saw in use.10

Krahka could use powers she had never seen used provided she had seen a being capable of using those powers.11

Krahka could not use the mask powers of beings she mimicked.12

Krahka was probably better at shapeshifting than Makuta because it was her only power whereas Makuta had many.14

If Krahka saw a being through a mirror and shapeshifted into them, she would probably morph into a mirrored version of them.15

Krahka's ability to call upon a form did not fade over time like a memory would.16

Krahka's form as a combination of the six Toa Metru was far less powerful than a legitimate Toa Nui would be.17

Krahka could merge the forms of anything she had turned into before. These merged forms did not necessarily look like an actual combination of those beings; her form that merged all six Toa Metru was not necessarily what a Toa Nui formed by the Toa Metru would look like.18

Krahka could take the physical form of a being with a Rhotuka, but could not use that being's Rhotuka power because that power was based on the essence of the being who used it, and Krahka could not duplicate that essence.19

When Krahka mimicked a Rahkshi, she was able to duplicate its power without duplicating the kraata because she didn't know there was a kraata and couldn't duplicate two things at once.20