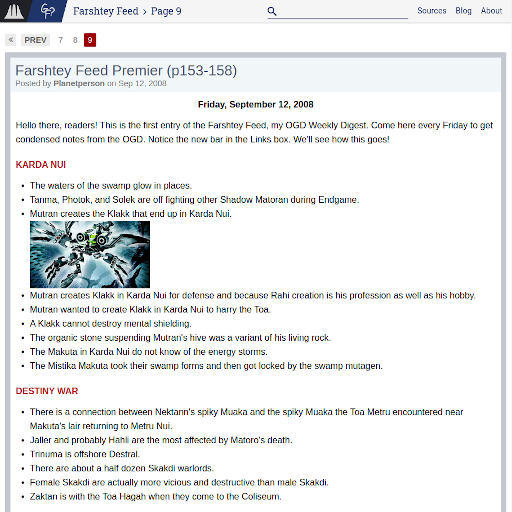 I’m pleased to announce that the Farshtey Feed has been newly added to the OGD Archive.

Back in 2008, I decided to start a little project called the Farshtey Feed. At the time, I was already in the habit of reading the Official Greg Discussion topic on BZPower more or less daily to get the latest, cutting-edge BIONICLE news from Greg Farshtey. I had even gotten into the habit of writing interesting factoids in a little notebook, categorized by topic, which later evolved into a massive Microsoft OneNote file.

Hey, you never know when a great BIONICLE sphinx will descend from the sky and demand that you answer esoteric BIONICLE trivia questions.

But really, I think what I actually had in mind was to compile that information into a sort of hyper-detailed BIONICLE encyclopedia (much like the modern Great Archives site). Whatever my reasons were, I eventually figured that other people might appreciate reading my summaries of the OGD. After all, the topic was notorious for being bloated with spammy posts or irrelevant/redundant questions. Wouldn’t it be nice if you could just skip past all that nonsense and get a concise summary of the actual information?

That was my vision for the Farshtey Feed, a weekly digest of the OGD topic that I started posting on my personal BZPower blog in September 2008. It started off slow, without much fanfare. But over time, as more and more people discovered it, it became a much-beloved alternative to reading the onerous OGD topic. Finally, keeping up-to-date with the OGD was both pleasant and fast.

The Feed also had an inadvertent but very crucial side-effect: it preserved six months’ worth of OGD information when BZPower suffered a dataclasm in March 2009. As far as I know, the Farshtey Feed is the only surviving record of any data from this time period.

Although the original Farshtey Feed is still available to this day on my BZPower blog, I had a few reasons for wanting to add it to the OGD Archive. First, BZPower is well-known to be plagued by technical issues, and there’s no particular guarantee that the original Farshtey Feed will survive into next week. I know I’m being harsh, but it’s true. Second, because BZPower has undergone so many forum upgrades over the years, the markup has been mangled quite a bit. For a long time, content wrapped inside of spoiler tags was simply unreadable (this actually appears to be fixed again after the most recent upgrade, so kudos for that). I also saw this as an opportunity to remove the now-defunct [source] links that pointed to the original OGD posts, which were lost long ago. Third, putting the Farshtey Feed on the OGD archive allowed me to integrate it into the site’s search engine.

Personally, though, I think one of the coolest new features I implemented was the ability to link to individual bullet points:

That should make the lore-masters at BS01 happy!

I hope this is just the beginning of adding more content to the OGD Archive. Ultimately I also want to add:

I actually don’t know where to find a copy of the 2004 Ask Greg. If anyone happens to have a copy of it, please do reach out to me on Twitter.

I’ve also taken the liberty of making a few minor improvements to the site. Any post that has been linked to directly is now highlighted, and it is no longer covered by the header bar. I also improved the performance of the auto-highlight feature in search results, although I’m aware that the quality of the highlighting is still somewhat wanting.

Anyway, I hope you enjoy this round of updates. As always, feel free to send your feedback to me on Twitter. Until next time.