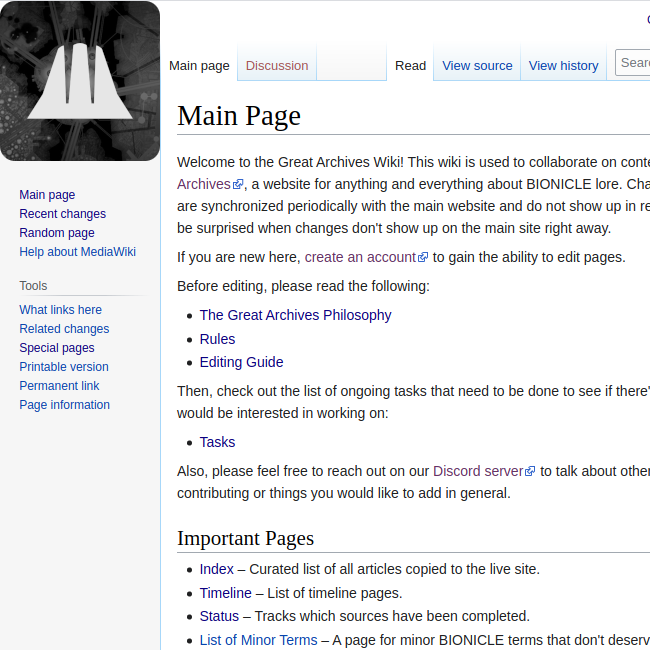 Hi everyone, hope you’re all hanging in there. Today I’m unveiling another major addition to the site! The Great Archives website is probably best known for hosting the Official Greg Discussion Archive, but one of its lesser-known features is its partially-complete encyclopedia and timeline, which aim to be a comprehensive guide to anything and everything about BIONICLE lore. Today I have an exciting announcement that hopefully will speed up their development: they can now be edited by anyone, including you!

Until now, the encyclopedia and timeline have been a solo project of mine, and I had not provided a way for other people to easily collaborate on it or make changes to it. I love BIONICLE lore, and for a long time I wanted to realize my vision of what an ideal BIONICLE reference site would look like, which is a bit different from existing sites like the BS01 wiki (more on that below). I first started working on it for fun on a private MediaWiki instance on my laptop in 2013, without any serious plans for making it public. But it slowly grew over time, to the point where I felt it made sense to share it online in 2019. Since then, I have been working on improving the look and feel of the website and making technical improvements behind the scenes. Now, I feel the time is right to open it up to editing by the public.

All you need to do to start contributing to the website is to join the new Great Archives wiki at wiki.thegreatarchives.com. This wiki will not replace the encyclopedia and timeline on the main site, but it will serve as a convenient staging area where everyone can collaborate on changes before they are published on the main website (up to now, the site has been generated from a private MediaWiki instance anyway). In other words, the wiki is like a rough draft for everything that appears in the encyclopedia and timeline on the main site.

So, you’re probably asking yourself, why bother with a new BIONICLE reference site when we already have BS01 and the BIONICLE Wiki on Fandom? To answer that question, I need to explain the philosophy behind what drove me to create this site in the first place.

The Purpose of the Great Archives

The telling of the 2001-2010 BIONICLE story was scattered through a variety of media, including comics, video games, websites, novels, guidebooks, four direct-to-video movies… as well as promotional booklets included in the BIONICLE sets from LEGO, long-defunct Flash games and animations, and obscure forum posts that were permanently deleted years ago. Intelligibly arranging these pieces of lore, some of which are canon, some of which are non-canon, and some of which occupy a dubious place somewhere in between, is so complex that it has spawned multiple projects that attempt to organize them into a comprehensible reading order. Even then, they cannot cover everything, because miscellaneous tidbits from bionicle.com, guidebooks, forums, and so on do not fit neatly into a chronological retelling of the story.

The purpose of the Great Archives is “to document the BIONICLE saga,” both by preserving some of the media that has become the most difficult to access (such as the Official Greg Discussion forum threads), and organizing BIONICLE media and lore into a succinct (yet complete), easy-to-read website in the form of an encyclopedia and timeline. In fact, my main motivation for building the Official Greg Discussion Archive was to make it extremely easy for me to cite specific Greg answers on the Great Archives site, although to my delight it is being widely used in other places as well, including BS01, TTV, Reddit, and various Discord servers. This is especially useful now that canonization contests are running again on TTV, where design criteria often depend on old Greg quotes.

So, what makes the Great Archives different from any other BIONICLE wiki? One of the central goals of the Great Archives is to document everything with citations to original sources, since many important facts were made known through extremely obscure sources (for example, the term “Toa Mangai” was introduced in a BZPower forum post by Nuhrii the Metruan that seems to have been completely lost to time). Every statement made in the timeline and encyclopedia (with some specific exceptions) must have at least one citation attached to it.

The content for the Great Archives is in the process of being written, and it is being constructed according to a special procedure which I have adhered to since I started the project by myself way back in 2013. Most wikis are written by choosing a list of things to make articles about (Toa, Kanohi, Tahu, Makuta, Mata Nui (Being), Mata Nui (Island), etc.) and then collecting information for each page from the source material. On the Great Archives, it works in reverse. We start by systematically going through each book, comic, web serial, forum post, etc. and organizing the information in them into the timeline and encyclopedia. Events and plot points in the BIONICLE story are sorted in chronological order in the timeline. All other information, such as descriptions of characters, powers, personalities, and other world building aspects, is sorted into the encyclopedia. The timeline can later be used as a reference for writing biographies and histories in the encyclopedia. This way, all information in the BIONICLE mythos will eventually be included on the Great Archives, with proper citations. It’s a long process, and you can find a full list of the sources being scanned on the Status page.

In order to make the task of organizing this information easier, for now, I have been simply dumping facts from sources into the timeline and encyclopedia without attempting to integrate them together and make them readable. It is much more efficient to save this for later, after most of the biggest sources are done. This is why the timelines and especially the encyclopedia read like a laundry list of trivia. Just know that eventually it will be improved.

I believe that the Great Archives should not be in the business of deciding what the one and only version of canon is (however, it does not contain any fanon content, unlike the Custom BIONICLE Wiki (nothing against that site – it’s great!)). On this site, we allow multiple interpretations to coexist in parallel. Whenever two sources disagree, we document both and explain if one is considered more canon than the other. Also, BIONICLE has multiple “design universes,” for lack of a better term, including the LEGO sets, the more organic-looking movie designs, and the video game designs, each of which is valid in its own way. For this reason, we include images of all designs in info boxes and make it easy for readers to make the site show different styles by default based on their preferences.

Visuals are an extremely important part of the BIONICLE experience, so it is essential to use attractive images in the encyclopedia. Unlike on BS01, images on the Great Archives should consistently default to the promotional artwork made by LEGO and Advance instead of comic book panels, with easy options for switching the visuals to movie style, video game style, comic book style, etc. for those who prefer those instead. Images should have aesthetically pleasing dimensions (roughly square for encyclopedia info boxes) and should be cropped to include a reasonable amount of background space around the subject matter, rather than being cropped to its edges without any padding.

The Great Archives should include anything and everything about the BIONICLE story, including out-of-universe information about sets, creative professionals, source material, and so on. It will only cover the 2001-2010 BIONICLE story. It will not host copies of full novels, comics, animations, etc., because there are already multiple projects that take care of that.

Although we use a wiki for collaborating on the Great Archives, the main, public-facing place for enjoying the Great Archives is on the main Great Archives website, not the wiki. Presenting the content on a separate, non-wiki website lets us curate content more carefully, style things more flexibly, and make the website faster and more efficient technologically speaking.

Finally, the site will remain ad-free.

So, what can you do to help on the wiki? I’ve made a page of tasks that need to be done, if you feel so inclined, including:

In addition to setting up the wiki, I stealthily added another cool feature to the site: info boxes on encyclopedia articles. Here’s an example from the Pohatu page: 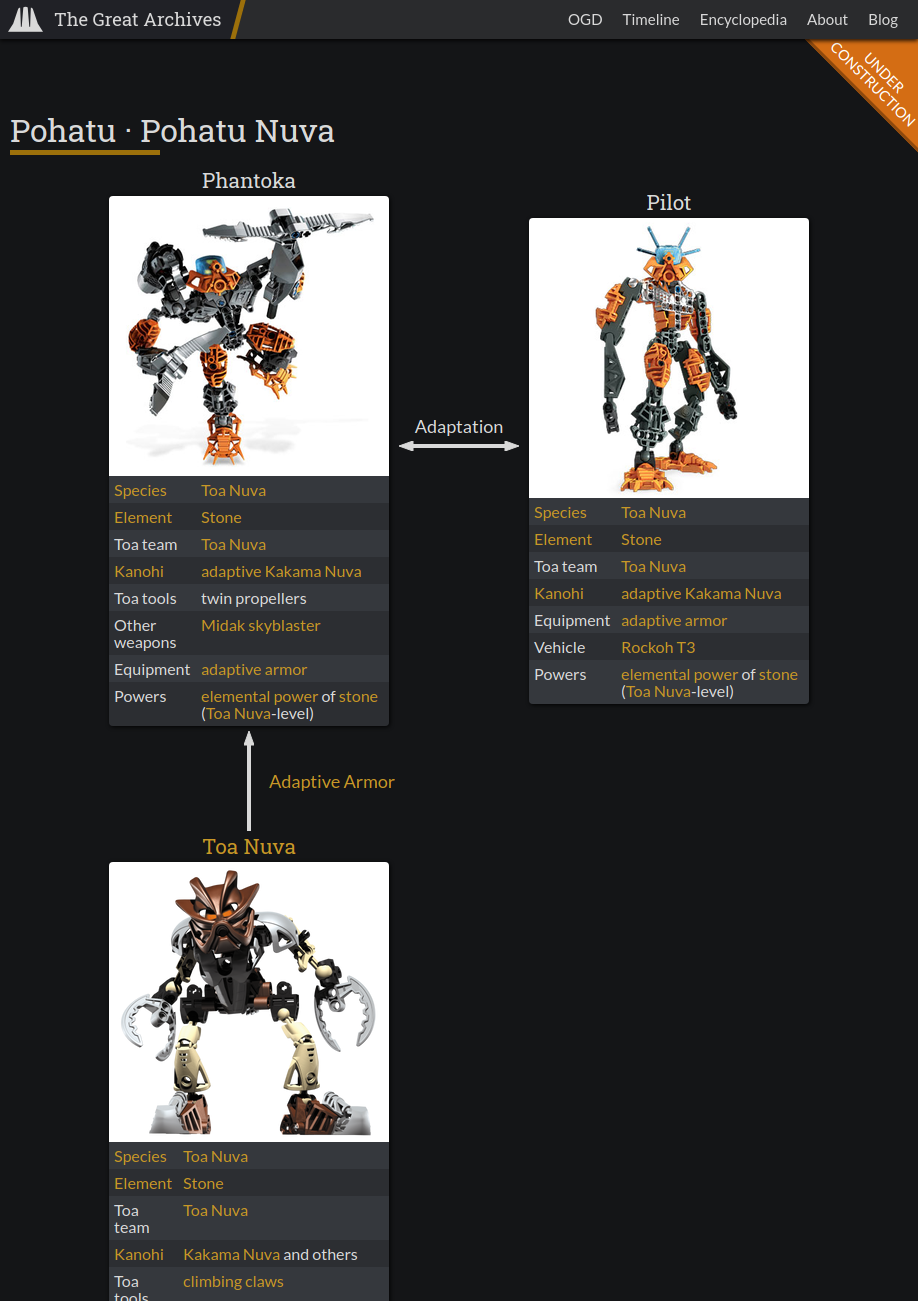 As you can see, it gives you a quick visual breakdown of all the forms a character has taken, what their powers are, and so on. I hope to have these added to more and more articles very soon.

If any of this interests you, make sure to create an account on the wiki and let us know your thoughts on Discord. And if not, don’t worry, there are lots of planned additions to the OGD Archive on the horizon.