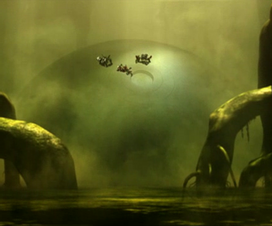 A mysterious spherical structure in the swamp of Karda Nui, the Codrex had a long history. It was built by the Great Beings and served three purposes: housing the Axalara T9, Rockoh T3, and Jetrax T6 vehicles; providing shelter and protection to the Toa Mata in their Toa canisters; and containing the technology necessary to awaken Mata Nui should it become necessary. It could be opened only by the use of six keystones. Inside, it seemed vastly bigger than it did on the outside. The use of a bank of machinery opened a portal in the floor which led to the resting place of the vehicles and the power core used to awaken Mata Nui. As of the end of story year 2008, the Codrex was still standing in Karda Nui, having survived the attacks of the Makuta and the energy storm.1

The Codrex was a great spherical structure in the swamp of Karda Nui, half-buried in the tip of a fallen stalactite. It looked like it had been there forever and was at the same time totally alien to the place.2