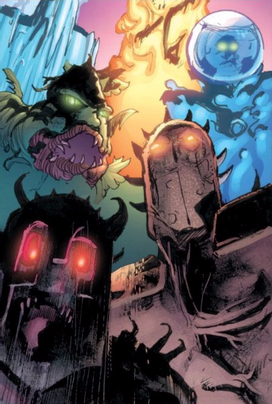 Over time, the Great Beings grew weary of the day-to-day rigor of running Spherus Magna, wishing to be free to invent and experiment. Using their vast knowledge, the Great Beings created six powerful entities they called Element Lords. Each Element Lord controlled the power of one of nature's forces: Fire, Ice, Sand, Rock, Water, and Jungle. Each was given an Agori tribe to watch over, the tribe whose choice of territory matched their element. The Element Lords were to protect the Agori from threats, guide them through crises, and take on the responsibilities of rule so the Great Beings could live as they wished. For a long time, this new system worked. Although the Element Lords were never particularly fond of each other, they had no reason to fight, and their tribes continued to thrive.1

The discovery of a powerful, silvery liquid springing from the core of Spherus Magna ignited all of the old jealousies and hatreds among the Element Lords. Each mustered an army of warriors, and together they waged the Core War. The Element Lords were believed to have survived the Shattering. With the liquid they sought dissipated into space, the Element Lords turned their attention to the Valley of the Maze and the power it protected. None of them were able to solve the Great Beings' last riddle.1

Teridax in the Melding alternate universe once mentioned that the powers that once ruled Spherus Magna were mad with a hunger for power.2