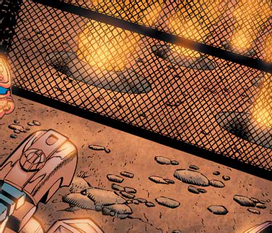 The Fire Pits were flame geysers in the center of Ta-Metru.1, 2 Matoran believed them to be the source of all fire in the district. They were surrounded by a fence and guarded by Vahki patrols. Because of the danger of the pits, Matoran required special permission from Turaga Dume to access them.2

Ta-Metru contained the Great Furnace, as well as smaller furnaces and forges. The flames that fed them came from the fire pits. The fire pits were highly dangerous places. Climbing down them was against the law in Ta-Metru, which was enforced by the Vahki. Not even mask makers were allowed near them, as the risk was too great. This was not only for the sake of any visitors who might come to harm near the fire pits, but also because if anything happened to the flames in the pits, production in Ta-Metru would come to a halt. The fire pits were located toward the center of the city and by the rear exit of the protodermis reclamation furnace.3

The Ta-Metru fire pits consisted of a half dozen deep, narrow craters from which spewed forth great jets of flame. A nest of underground pipelines fed the fires to wherever they were needed in the metru. Given their importance, the site was fenced in and guarded by Nuurakh.3

The fire pits were heavily guarded. The Great Furnace was the most significant source of heat in Ta-Metru apart from the fire pits.3

The fire pits were one of the most highly secured sites in all Ta-Metru, surrounded by a fence and guarded by Vahki.4

The Fire Pits were flame geysers believed by the Matoran to be the source of all fire in Ta-Metru. Because of their importance, the entire area was fenced in and heavily guarded by Vahki patrols. Matoran required special permission from Turaga Dume to come here, because the unpredictable geysers were highly dangerous.5

The Ta-Metru Great Disk was hidden deep inside a fire pit.5