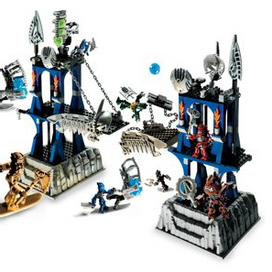 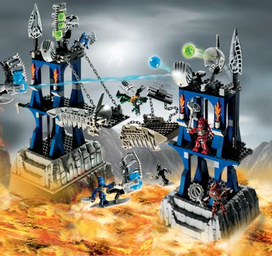 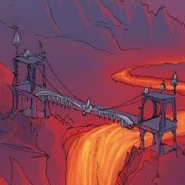 The lava chamber gate was the entranceway to the Chamber of Life. It was located on a vast plain bisected by a river of lava and at the end of a bridge.1

Axonn described the Lava Chamber Gate to the Toa Inika. Just before one reached the chamber that held the Mask of Life, there was a great bridge over a river of lava. At the end of the bridge was a small gateway that led to the mask's hiding place. The Toa Inika needed to go across the bridge to achieve their goal. The bridge was incredibly ancient and not very stable, so there was a danger that a well-placed blast of power could bring it down. If the Piraka reached it first, they would undoubtedly set up zamor sphere launchers to defend it against the Toa Inika. Once over the bridge, the Toa Inika only needed to raise the gateway, and their quest would be almost finished.2

The lava chamber gate was at the bottom of the 777 stairs. The Chamber of Life was just beyond the gate.3