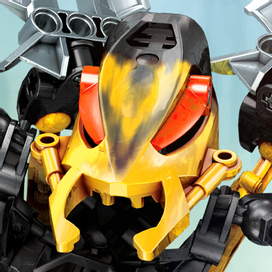 The Kanohi Mohtrek was the Mask of Duplication, worn by Makuta Bitil and his greatest source of power. It allowed Bitil to summon versions of himself from the past to fight alongside him. There were restrictions, however. The past versions could only stay in the present for as long as Bitil could maintain concentration. When they returned to the past, they would remember nothing of the future. If a past self were killed in the present, Bitil himself would cease to exist.1

Time was Bitil's greatest weapon – his Kanohi Mohtrek, the Mask of Time Duplication, let him draw other versions of himself from the past to fight by his side, making him a one-Makuta army.2

If a past self of a Mohtrek wearer was killed, an alternate universe was created in which that being's actions up until then never existed.3

The Mohtrek was able to summon a past self that did not wear a Mohtrek.4