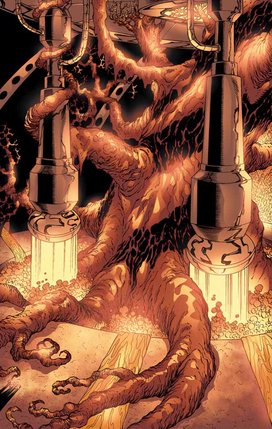 The Morbuzakh was an intelligent plant creature created by Makuta as part of his plan to capture the Matoran of Metru Nui. The purpose of the Morbuzakh (and the Karzahni) was to drive the Matoran away from the outskirts of the city and toward the Coliseum, making it easier for the Vahki to round them up. The Morbuzakh also captured a number of Matoran for Makuta. Its primary tools were its vines, which were so long they could reach anywhere in Metru Nui. The massive king root of the Morbuzakh was hidden inside the Great Furnace in Ta-Metru. The Morbuzakh thrived on heat and flame. It was able to spread via seeds, which clung to the ceilings of furnaces and foundries throughout the Metru. When these seeds struck a solid object, they sprouted, and baby vines immediately wrapped themselves around whatever was nearest. From where the Morbuzakh lived, it was able to communicate telepathically with other species and to gather information about the outside world through its vines.1

Morbuzakh vines were thick, blackened, and twisted. They could snake out of cracks in the ground and weave through the air. They could wrap themselves around buildings and were strong enough to collapse buildings made from solid protodermis in seconds. The Morbuzakh hated the cold; its vines would recoil at the touch of ice.2

A black, twisted plant called the Morbuzakh appeared throughout the city of Metru Nui, its vines wrapping around buildings and transport tubes. Under the unrelenting pressure of its tendrils, even the finest structures on Metru Nui crumbled.3

In researching the Great Disk, Ehrye learned that the source of the Morbuzakh plant was a single root – a sort of king root. The disks needed to be used against that root to stop the plant.5

Ehrye showed Nuju records in the Knowledge Tower that referred to a "king root" that could be recognized by the brown stripe that ran up and down its length. Vakama noted that the Morbuzakh did not seem to like the cold but thrived in heat, able to survive even a fire pit.6

The Toa Metru once found Morbuzakh seeds covering the ceiling of an extremely hot Ta-Metru forge. Each seed was a round object, roughly a quarter the diameter of a Kanoka disk. Its outer shell was pitted, extremely hard, and the colors of fire. The seeds fell from the ceiling and landed on those below. When the seeds struck, tiny vines sprang forth from the shell and wrapped around whatever was closest, hanging on with an unnatural strength. The fact that there were seeds implied that the Morbuzakh was reproducing. Whenua assumed that the roots of the seedlings linked up with the king root, allowing the Morbuzakh to spread.6

The Toa Metru once found Morbuzakh seeds covering the ceiling of an abandoned Ta-Metru forge. They dropped onto the Toa and, when they struck, burst open and sprouted powerful vines that enveloped them. They reached for the Toa's masks. The Toa later realized that the seeds' presence implied that the Morbuzakh was reproducing itself.8

Inside the outer ring of the Great Furnace, from cracks in the floor grew small, twisted plants with buds that stank of rot. They made a soft sound like whispering. These were young Morbuzakh vines.6

The massive inner chamber of the Great Furnace was transformed into a sanctuary for the king root of the Morbuzakh. Dominating the room was a huge, thick, winding stalk that extended from the ground all the way to the rooftop. The winding stripe that ran down its length marked it as the source of the Morbuzakh. Branches extended all along the root, entwining themselves with the masonry of the walls and floors. The king root had truly become a part of the Great Furnace, with each of those branches extending beyond the furnace into the city. Here, the Morbuzakh was able to speak to the Toa Metru telepathically. The Toa Metru in turn were able to sense its feelings – an overwhelming hunger to possess the city and drive away anything that was not Morbuzakh. There was more there, traces of another intelligence, but they were too vague for the Toa to comprehend. The Morbuzakh said the Matoran lived and worked only because it chose to let them. It intended first to drive the Matoran away from the city so they could not escape, then it would claim the city as its own. Those who survived could survive the Morbuzakh or perish. The Morbuzakh's voice was like a swarm of metallic hornets. The king root was invulnerable to fireballs; fire simply fed it.6

The king root was a massive, thick stalk that was situated in the Great Furnace. It was entwined with the walls and ceiling of the chamber, and it sat in a huge pool of molten protodermis. A thick dark stripe spiraled around the stalk. It was able to speak telepathically. The fires of the Great Furnace fed the king root.8

The Morbuzakh was a blackened, twisted plant that threatened to turn all of Metru Nui into rubble. Its vines were powerful enough to crush entire buildings. Matoran did their best to defend their homes and workplaces against this menace, which appeared to strike from everywhere at once. Lucky Matoran were able to run to safety, but others vanished completely. The Morbuzakh vines first appeared on the outskirts of Ta-Metru. The vines quickly drove Matoran away from the area, forcing them to flee toward the heart of the city. As the Toa Metru later discovered, the king root of the Morbuzakh was intelligent and intended to take over the city and turn the Matoran into its slaves. The Toa Metru were able to destroy the Morbuzakh using the six Great Kanoka Disks. They did not realize that someone had actually commanded the Morbuzakh to attack the city. Despite the disappearance of the vines throughout the city, most Matoran still refused to return to outlying areas for fear that the Morbuzakh would return.9

The Morbuzakh was an intelligent plant menace of Makuta Teridax's own creation. He unleashed it on the city of Metru Nui, driving the Matoran into panic.10

The seeds of the Morbuzakh would likely each create a distinct root, all of which would likely be part of a single collective entity.11

The Morbuzakh was less powerful than Teridax.12

The Morbuzakh was not considered a Rahi, as it was a plant, not an animal.13

The Morbuzakh plant was not created from the transformation of an existing being.14