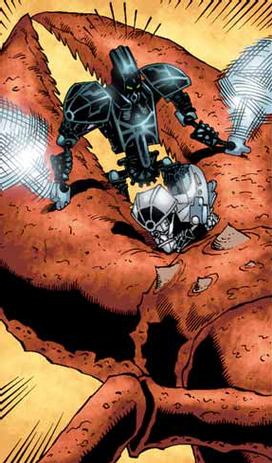 The Mutant Ussal Crab was an incredibly huge version of the common Ussal crab, possibly cross-bred with some other monstrous Rahi. As of story year 2004, it had resisted stasis and was kept locked up in a sub-level of the Archives, near the Two-headed Tarakava.1

One of its claws was big enough to grab both Whenua and Nuju at once, and it was too strong for them to wriggle free. It was a rare creature, and Whenua was reluctant to risk hurting it.2, 3 Archivists were not quite sure what this creature was, possibly a hybrid of an Ussal crab and some larger creature. They did know that it was practically blind and used its hearing to track prey.2 This creature was almost blind. It relied on its incredible hearing to get around.3 Whenua was able to cause it to retreat from attack by emitting a loud hum from his earthshock drills.2, 3

The Ussal hybrid was known to have been in the Archives.4