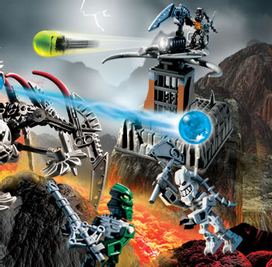 Piraka outposts were small guard stations located throughout the island of Voya Nui, armed with robotic Nektann for defense.1

Close to a dozen of these outposts dotted Voya Nui. They were built by the Piraka to defend approaches to their stronghold. The Toa Inika needed to destroy at least a few of them if they hoped to take the Piraka's headquarters. They were protected by automated guardians called Nektann. Some Nektann were fixed, and some were mobile. Jaller was relying on spider-like Rahi called "Fenrakk Spawn" to help the Toa Inika smash these outposts, but Nuparu was not sure how far they could trust these creatures.2

Nektann were automated guardians used by the Piraka to guard their outposts and stronghold.3