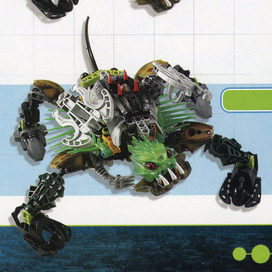 Pit war tortoises were massive creatures which came to live in the waters around Mahri Nui. They were believed to have life spans in excess of 100,000 years. They were recruited by Carapar into his undersea army, and the fiercest served as his personal steed in battle.1

The Pit War Tortoise was a very ancient breed of Rahi, one of which was used by Carapar as a mount.2