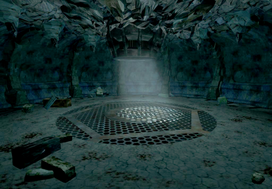 The Prison of the Dark Hunters was a series of cells inside a cave network in Onu-Metru, located near the Canyon of Unending Whispers.1, 2, 3. The Dark Hunters used this place to keep important prisoners. It was guarded by squads of Vahki.3

As of mid-story year 2004, this subterranean site was being used by the Dark Hunters to hold their captives. No one knew who was in there or why the Dark Hunters were taking prisoners at all. It was expected that the Vahki would handle the situation in time.4

The cell itself was located inside a huge underground cavern, resting on an island of its own in the middle of a sea of sand. The surrounding area had no apparent guards. A massive troller lurked beneath the surrounding sands to deal with escapees.5

The only prison on Metru Nui was built for Krekka and Nidhiki's use.6