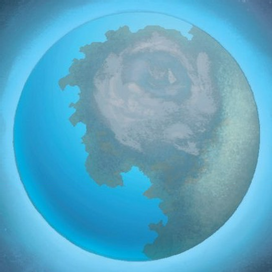 Spherus Magna was once a lush, green world. From its great ocean to its sun-bleached desert and its vast forests, jungles, and mountain ranges, it was a wonder to behold. Six tribes of Agori lived on this world in peace and plenty. The world of Spherus Magna was ruled by a collection of men and women called the Great Beings. They were wise and just, and for an age, their creations helped to make life better for everyone who lived on the planet. The Great Beings later delegated control to the six Element Lords. Eventually, a powerful, silvery liquid springing from the core of the planet sparked the Core War. The Great Beings were shocked to learn that the substance was so powerful and unstable that efforts to drain it from the planet itself would cause an explosion that would shatter Spherus Magna. The war culminated in the event known as the Shattering, when an explosion tore Spherus Magna into three pieces.1

In an alternate universe, Mazeka and Vultraz appeared in a forest on Spherus Magna. Here they saw a massive tree banded with golden metal. They also encountered what looked like a lake, but its waters undulated like some vast organism. When Vultraz's skyfighter flew by it, shards of razor-sharp crystal flew up from the depths of this pseudo-lake, slicing pieces off the vehicle. The instant the vehicle made contact with its surface, it transformed into sheer energy and disappeared.2

The Great Beings once ruled the world of Spherus Magna prior to the Shattering.4

Energized protodermis leaked from the core of Spherus Magna and triggered a massive explosion that flung two huge chunks into orbit. These became the jungle moon of Bota Magna and the ocean world of Aqua Magna. The desert world that remained was renamed Bara Magna by the survivors.5

Before the Core War, the world of Spherus Magna was an amazing place, with its vast cities of the Bara Magna desert, to the living vessels that sailed the Great Ocean, to the incredible creatures who dwelled in the deep forest. The world was ruled by the Great Beings, brilliant scientist-kings who lived inside a fortress with no entrance which could only be accessed with their assent. The sounds of the sea and the sight of trees that stretched up to the sky were fond memories for Raanu, although he was certain they were gone for good after the Shattering.6

All tribes had both male and female members.7

Inhabitants were not made of protodermis.8

Spherus Magna is what Matoran legend referred to as "Paradise."9

Tribes developed on Spherus Magna as a natural consequence of different groups of beings congregating in the same areas geographically.11