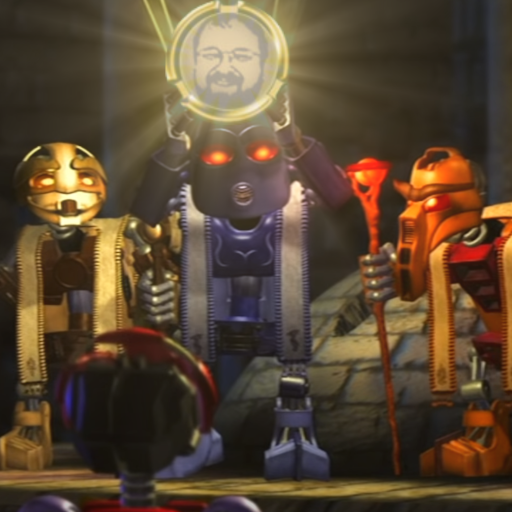 In the BIONICLE fandom the issue of “canon” comes up very often. The BIONICLE story was presented through a variety of media during its run, often made by different authors, different artists, or different contractors outside of LEGO. Naturally, these different pieces of the BIONICLE storyline didn’t always agree in the details. For example, the scene where the Toa descend to Makuta’s lair through Kini-Nui in the Mata Nui Online Game (MNOG) by Templar Studios is very different from the scene described in the book BIONICLE Chronicles #1: Tale of the Toa by Cathy Hapka. In one version, the Toa’s golden masks appear on their faces, and they unlock Kini-Nui with the Makoki Stones. In the other, the Toa get their golden masks by putting their collected Masks of Power on statues, and then a tunnel opens up in Kini-Nui, and no Makoki Stones are involved. The book is supposed to be “more official,” but then the fully canon BIONICLE Encyclopedia also says that the Toa used the Makoki Stones to open Kini-Nui. So, what’s the official version of this story that all BIONICLE fans should agree on?

In the Great Archives encyclopedia and timeline, our mission is to present all of these differing versions in parallel – the reader gets to decide which version he or she likes best. But, for simplicity, we BIONICLE fans often like to stick to one, official, “canon” version of events. Plus, there will always be cases even on the Great Archives where we have to choose one version which will be presented more prominently (for example, we have to pick a version to write first, and sometimes we might put one version in the main text of an article and another in a footnote). On top of this, there’s also the issue of deconflicting the nitty gritty details of Greg Farshtey’s answers in the Official Greg Discussion topics. For example, what are we supposed to do with quotes like these?

We’ve had countless similar situations pop up in BIONICLE lore discussions on our Discord server, which can best be summed up with the following video:

It would be nice if there were a consistent way of resolving these conflicts. That’s why I and several other BIONICLE enthusiasts have come up with a systematic way of ranking sources of BIONICLE lore: the BIONICLE Tiers of Canonicity! The Tiers of Canonicity are a list of rules that helps us rank the “officialness” of different sources of the BIONICLE story in an automatic, impartial way. This is actually a concept already used in at least two other fandoms: Neon Genesis Evangelion and Star Wars. The Tiers are a tool that we will be adopting on the Great Archives website and wiki, but we encourage others in the BIONICLE lore community to use it to their advantage as well!

I’d like to thank the following people for co-authoring this set of rules (in alphabetical order): aikuru, Dag, Gonel, HahliNuva, JSLBrowning, Lehari, maxim21, Nicrophorus, SurelNuva, toaskello, and Wolk. Believe me when I say that we didn’t simply pull arbitrary rules out of a hat. We did a lot of sleuthing in the Official Greg Discussion Archive to make sure that the rules we came up with are as consistent as possible with what Greg Farshtey (who was a member of the core BIONICLE story team) has stated on issues of canonicity in the past. We also tried to design the rules according to the general principle that the closer a source’s author was to the core story team, the higher it ranks in canon. We also took into account the fact that Greg Farshtey, by his own admission, is not a visual thinker [1, 2, 3, 4, 5, 6, 7, 8], so sometimes visual details in other media can take precedence over his written work. In all cases, we tried to source our rules in explicit quotes about levels of canonicity from Greg Farshtey when they were available.

The BIONICLE Tiers of Canonicity are as follows, where rules are listed in decreasing order of precedence:

The most up-to-date version of the Tiers can always be found on their Great Archives wiki page.

Do you have comments or criticisms about the Tiers? Let us know on our growing Discord server or Twitter!