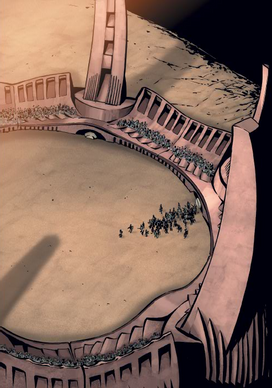 Arena Magna was one of the oldest single structures on Bara Magna. It was part of the city of Atero. It was originally built long before the Shattering as a site for sports matches and other public events. After the disaster, it was abandoned for some time. When the Glatorian system came into being, it was decided to use Arena Magna as the site for an annual tournament. Atero was busiest just before the annual Glatorian tournament, when Agori from various villages arrived to prepare Arena Magna for use. It was important work, but not always terribly exciting. Most Agori would do their duty, knowing the reward was front-row seats for all the matches. Emotions ran high at the tournament, with each village wanting its Glatorian to win, and fights between Agori had been known to break out in the stands. One of the most famous spots in Arena Magna was the Wall of Champions, where the images and names of tournament winners were carved. The Arena Magna was built in the center of the Skrall River and could be reached most easily by a bridge on the eastern side. However, when the river was mainly flowing sand, not water, as of story year 2009, it was possible to approach the Arena from other directions as well. The stands in the arena were large enough to accommodate more than 1,000 Agori. It was normal for every resident of Tajun, Iconox, Vulcanus, and Tesara to attend at least part of the tournament. The Zesk of the sand tribe were not welcome at the arena and would not come anyway. Arena Magna was built entirely of stone, with the exception of the tournament floor, which was sand. Entry was gained through two large gates on the eastern side, although smaller entrances were added later to allow Agori easier access and exit during the tournament.1

Arena Magna was located on a spit of land on the crest of a dusty waterfall of the Skrall River.2, 3

Of the six arenas on Bara Magna, the one in Atero was the main one.4

The Great Beings were involved in the Arena Magna's design, but it was physically built by Agori.5, 6