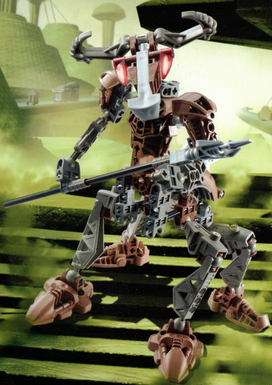 Artakha bulls were swift, strong, herbivorous Rahi which used their sharp horns for defense. It was considered to be one of the first Rahi known to Matoran and was rumored to be highly intelligent. The species lived in Le-Metru on Metru Nui. None were ever seen on Mata Nui.1

The Artakha bull was one of the oldest Rahi known to the Matoran, with Archives records dating back to well over 2,000 years before story year 2005. It was believed to be the inspiration for the legend of the mutant Kane-Ra who guarded a tunnel network. Other tales said that the Artakha bull was actually present on Metru Nui before Matoran civilization arose. These latter stories led to the creature's name. According to the tales, Artakha bulls had intelligence far beyond Matoran level, and because of this, they were the only creatures allowed by Mata Nui to live in Artakha with the Matoran. Naturally, most of this was mere myth.2

The Artakha Bull was swift, strong, and an excellent tracker. Whatever the legends said about the Artakha bull's good nature, in reality it seemed to be generally hostile.2

Bomonga remarked that Artakha Bulls were smart, making it difficult for him to capture them.2