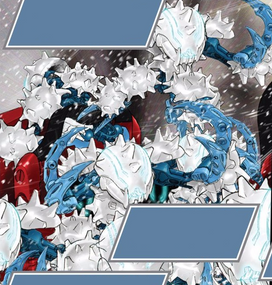 The Great Beings created the baterra as a "doomsday weapon" during the Core War. The baterra were a small army of shapeshifting mechanical beings programmed to seek out and eliminate any armed warrior. With these, the Great Beings hoped to force a halt to the war by wiping out the opposing armies before it was too late. They only later came to be called "baterra."1

The baterra were shapeshifting robotic creatures designed to end war by wiping out anyone who was armed.2

It was believed that the baterra might stalk the Black Spike Mountains.3