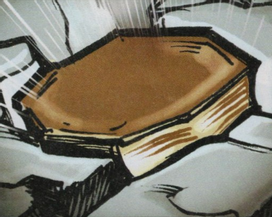 The legendary Book of Certavus was a volume written by the legendary Iconox Glatorian Certavus which detailed all of the fighting moves that made him an arena champion year after year.1

The book was supposed to contain the secret to winning any fight. Gresh and Berix found an old, worn copy of the book in the ruins of an old training area. On the book's cover was written "Certavus." On its first page was written the advice, "A fighter's greatest weapon is his mind. The mind is a more powerful weapon than any sword and a more powerful defense than any shield."2

Certavus was the author of the Book of Certavus, which contained a record of his fighting moves and strategies. This book was hidden in the ruins of an old arena in the desert and later found by Gresh and Berix.3