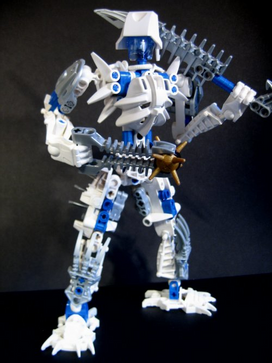 Certavus was a legendary Iconox Glatorian. He authored the Book of Certavus, a volume detailing all the fighting moves that made him an arena champion year after year.1

Certavus was famous for his skill, and every fighter knew his name.2

Certavus was the Prime Glatorian of Iconox at its founding. His skill and incredible record in the arena had made his name a legend. Certavus was one of the founders of the Glatorian system. He was also the author of the famed Book of Certavus, which contained a record of his fighting moves and strategies.3

Certavus was the very first Glatorian tournament champion, and he was listed on the Wall of Champions.4

Certavus was a Glatorian from Iconox. He perished some time before story year 2009 from natural causes after thousands of victories in the arena.6

Certavus and Tarix got along.7