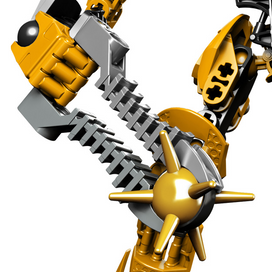 The Thornax launcher was a light, simple weapon which had been in existence for more than 100,000 years. Originally, it was thought a crude device and mainly used by members of the sand tribe. After the Shattering, and the subsequent steep drop in the technological level of society, the Thornax launcher became one of the more sophisticated mechanisms in use on Bara Magna. The launcher consisted of two metal rods constructed parallel to each other, which gripped the Thornax fruit. A trigger mechanism squeezed the rods together, forcing the Thornax out at high speed. The launcher was specially designed so that its use would not crack the shell of the fruit, which could cause it to explode prematurely. Thornax launchers were given to a Glatorian when a village hired him or her, for use in the arena. They were also carried by Skrall warriors, bone hunters, Vorox, and some Agori traders. Reliable and easy to repair, they were the only ranged weapon in use in the desert.1

Thornax launchers were carried by Glatorian, Skrall, bone hunters, and others.2

The Thornax launcher was one of the most powerful weapons in use on Bara Magna.3

The Thornax launcher was developed before the Shattering.4