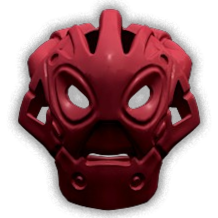 The Kanohi Calix was the Kanohi Mask of Fate. It allowed its user to perform at the absolute peak of one's natural abilities, allowing one to run, leap, dodge, etc. better than anyone of one's own kind.1

The Kanohi Calix was the Mask of Fate. It allowed its user to pull off feats others would think impossible.2

The Calix allowed users to pull off feats others would think impossible, such as seemingly incredible leaps and dodges. It didn't allow users to do absolutely anything; it didn't allow invulnerability or flight. It allowed users to do things they would be able to do within reason, such as leaping and dodging, but do them in seemingly miraculous ways. It allowed for extremely quick reflexes and extended leaps.3

The Calix didn't allow a user to squeeze into spaces that were just too small, it couldn't change the shape of user's bodies.4

The Calix didn't operate based on the beliefs of users or observers when determining the possibility of actions.5

The Calix needed to be triggered, it was not a constant, passive effect.6

The Calix wouldn't allow a user to accomplish a task they were unfamiliar with because it didn't increase the knowledge of its user.7

The Calix was likely made using disks other than those found in Metru Nui.8