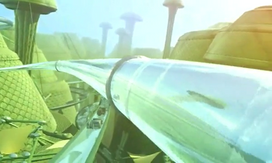 Metru Nui utilized a chute system as its primary means of transportation. Chutes were long cylindrical tubes made of liquid protodermis held in place by a sheath of magnetic energy. The protodermis flowed through the chutes at high speed, carrying cargo and Matoran from place to place. Passengers were required to hold their breath during transit. Chutes ran in a preset direction, and attempting to change that direction could cause severe damage to the system.1

Le-Metru, transportation center of Metru Nui, was the core of the network of magnetized protodermis chutes that ran throughout the city.2

Chutes were transparent, magnetized protodermis tubes that carried Matoran from place to place on Metru Nui. The chutes ran throughout the city, but the densest concentration of them was in Le-Metru. They all fed into one another.3

It was somehow possible to seal the walls of a chute, so that the walls of the chute threw riders back. The seal was even strong enough to resist Matau's aero slicers.3

A complicated network of chutes ran throughout the entire city of Metru Nui and was used by Matoran for transport.4, 5

A chute consisted of protodermis with a magnetic energy sheath that kept things moving quickly through it. See also force sphere.6

Chutes were normally accessed through chute stations. Jumping into a chute from the outside, or chute-jumping, was risky. If the speed and timing of the leap were not just right, one could bounce off the outer layer rather than passing through into the magnetized protodermis flow. Besides being dangerous, it was a sure way to attract the attention of Vahki.7

The flow of magnetized protodermis in the chutes was powered by pumps. These pumps could be controlled from the Le-Metru control room where Kongu worked. The pumps could be used to reverse the flow, although doing so risked causing the entire system to explode.7

All chutes were manufactured in Le-Metru, and the entire chute system was supervised from there as well.8, 9 The chute system controls were located in the Moto-Hub.9, 10

The chute system was constructed under Turaga Dume's leadership.12

Chutes were the primary transport system for Metru Nui. They were long, cylindrical tubes made of liquid protodermis held in place by a sheath of magnetic energy. Magnetized protodermis flowed through the chutes at high speed, carrying with it Matoran and cargo on their way to and from different metru. Most chutes ran aboveground – in some cases high above – held aloft by a system of solid protodermis braces. Some ran below the surface to reach different levels of the Archives, but many of the subterranean chutes were in bad repair and too dangerous to use. Few Le-Matoran wanted to go down below and fix them. Chutes ran at varying speeds, although the preferred rates in Le-Metru were fast, sometimes worryingly fast. Every chute ran in a preset direction. Reversing the flow of a chute was considered highly dangerous.13

There were two ways to board a chute. The recommended way was at a chute station. These stations were located all over Metru Nui. Here the chute slowed down enough that boarding could be done safely and easily. The other method, called "chute jumping," was illegal although still done by some of the more daring Matoran. Chute jumping involved leaping onto a chute during the split seconds that the magnetic energy wavered so that one passed through the outer layer of force and into the chute itself. This was risky for two reasons. First, if the jump was not timed right, the jumper could smack into the outer layer hard and possibly fall off the chute and plunge to the ground. Second, jumping into a high-speed chute increased the chances of being struck by another passenger or piece of cargo. Some Matoran also did "disking" tricks in chutes. This involved riding through the chute while standing on top of a Kanoka disk, often doing flips or sliding along the walls or ceiling of the chute. This was very common in Le-Metru, although it was a good way to attract the attention of the Vahki.13

Chutes faced a number of problems. Sometimes, portions physically broke off, sending riders flying into the air. In very old chutes, the braces might have been in bad repair, causing the chute to come crashing to the ground, or else the magnetic energy sheath could weaken and the liquid protodermis would leak out. If a flaw developed in a chute's construction, a portion of the magnetic energy could break off and fold in on itself, becoming a force sphere.13

Kongu was responsible for the main chute controls.13

Visitors to the Moto-Hub could see the inner workings of the amazing Metru Nui Chute system and obtain an unlimited Chute pass.14

There was a time when the only incidents of theft in Metru Nui involved a crafter taking another's tools or something equally minor. That was before the chute network became as extensive as it was in mid-story year 2004. The expansion of the transportation system made it easier for criminals to find ways to divert cargo shipments down little-used chutes where they could be looted at leisure. Le-Matoran monitored the chutes and shipments as best they could, but with thousands of tons of cargo going through the system every day, it was impossible to keep track of it all.14

Travelers could take chutes or Ussal carts to get around Metru Nui. Chutes were recommended, as they were faster, more accessible, and reached virtually every spot in the city.14

As of mid-story year 2004, due to the extensive damage suffered by the chute system citywide due to the Morbuzakh vines, citizens were advised that chutes might be closed without notice for repair work. Those who spotted a damaged chute or a force sphere forming were encouraged to notify authorities at their local chute station. Citizens were warned that riding in closed chutes was both highly dangerous and illegal.14

Most chutes ran aboveground, often supported by solid protodermis braces. Some ran underground or underwater, most of which were in poor repair and largely abandoned by the Matoran. The Visorak and other Rahi used these to reach the city. Chutes ran in a preset direction, and attempting to change that direction could cause severe damage to the system.1

Chutes could be boarded at a chute station or by "chute jumping," which entailed leaping into a chute during the brief moments when the magnetic energy wavered and the outer layer could be penetrated. Chute jumping was dangerous and illegal.1

Chutes suffered from a number of potential problems. A weakened magnetic sheath would cause liquid protodermis to leak out. Poorly constructed braces could break and cause the chute to collapse. It was also possible for a portion of the magnetic energy to break off and form a force sphere.1

Le-Metru was where the complex chute system used for mass transit was maintained.16

The electro chute blade was a Xian weapon which made use of miniaturized chute field technology.17

Freight sleds were used to move cargo through chutes.18

At random intervals, chutes slowed down and their magnetic force became permeable so occupants could jump out.19

Matoran didn't have to hold their breaths for that long while traveling via chute because of how quickly they moved.20