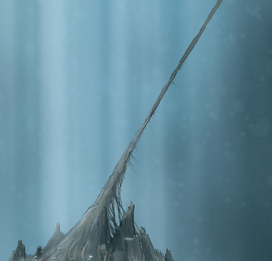 The Cord was a tangled, twisted cord of solid protodermis linking Mahri Nui below to Voya Nui above. Inside the cord was a complicated and partially flooded tunnel network, home to both land and sea Rahi. The cord came to an end atop a mountain peak near the village of Mahri Nui. One could also exit through small openings near the base. Going this way allowed one to adjust gradually to the higher pressures below. It was not well known what dangers lay along the way.1

Vezon described it as a spiral, a big stone tunnel that went down and down and ended in Zyglak.2

The Cord was a narrow stone structure that linked Mahri Nui to Voya Nui. It was formed by cooling lava from Mount Valmai and caused Mahri Nui to act as an anchor for the larger island.3