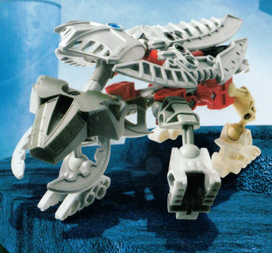 The dermis turtle was an amphibious Rahi which lived in Ga-Metru and later migrated to Ga-Koro. Matoran believed that they could predict the weather, as they retreated into their shells when storms were coming.1

Dermis turtles were a docile Rahi commonly seen in the lakes and canals of Ga-Metru. They were particularly fond of unrefined liquid protodermis pools. The hard silver shell of the dermis turtle was almost impervious to attack, and it could use its sharp silver tusks in defense when necessary. It was generally a peaceful creature, fighting only when attacked.2

Since Macku's initial discovery of dermis turtles, their population seemed to explode, almost to the point that they became pests.2

Dermis turtles had the unusual talent of detecting upcoming changes in the weather. When these Rahi retreated into their hardened shells, there was a good chance that a powerful storm was just a day or two away. Matoran often used the phrase "dermis shell weather" to indicate unpleasant weather conditions.2

Another distinctive feature of the dermis turtle was its melodic cry. In some areas of Ga-Metru, residents grew accustomed to, and in some case even enjoyed, the creatures' singing at night.2