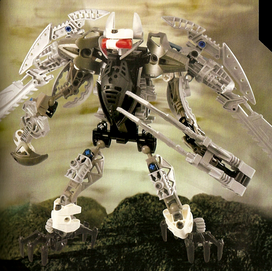 Dweller was a Dark Hunter assigned to monitor events on Metru Nui.1, 2 He had the ability to read minds, screen his own mind from telepathy, and drive a target mad with nightmares.1

Although one might not guess it from his appearance, Dweller, as he was code-named, had one of the most important jobs in the Dark Hunter organization. He was on permanent assignment in the city of Metru Nui, tasked with monitoring events there and relaying information to the Shadowed One via messages attached to Rahi. The post where he lived was located in the Archives far beneath Onu-Metru. Metru Nui was strategically vital to both the Brotherhood of Makuta and the Dark Hunters.3

At first glance, Dweller's strength was obvious. However, the powers which truly made him valuable were those of his mind. From his post in the Archives, he was able to keep track of everything that happened in the city and to screen himself from the Rahaga and others who wandered through the catacombs beneath Metru Nui. He was smart, silent, and patient. He spent close to 1,000 years at his post.3

From his post in the Archives, Dweller could reach out with his mind and probe the thoughts of others or drive them mad with nightmares. He was able to screen himself from others' perceptions so he could not be spotted.3