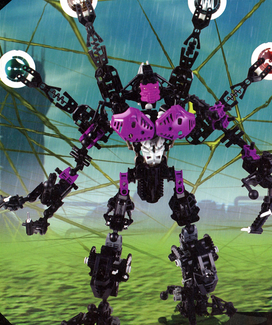 Eliminator was a Dark Hunter1 charged with killing any members of that organization who failed their missions and then carrying out those missions himself.2 He was nearly invisible in low-light conditions and could harness and combine the powers of up to four Kanoka disks and then fire the energies from his claws.2

In recent times, Eliminator, as he was code-named, acted as a kind of troubleshooter within the Dark Hunter organization. When a Dark Hunter failed his mission, Eliminator was dispatched. His first task was to annihilate the incompetent who could not complete the task. His second was to carry the mission to conclusion himself. At both of these, he excelled. Eliminator was universally hated by his fellow Dark Hunters and rarely returned to the base on Odina. The Shadowed One was wary that despite his sheer power, his comrades might join together in an effort to eliminate him.3

Eliminator had the ability to harness and combine the powers of up to four Kanoka disks, projecting the resultant energies from his razor-sharp talons in lightning-like bursts. He could also hurl Kankoka disks from his back-mounted launchers. Despite his size, he was agile and swift. Shadows seemed to cling to him, making him nearly invisible in low light.3

As of story year 2006, Eliminator was on another island, waiting for a Dark Hunter to commit the sin of failure.3