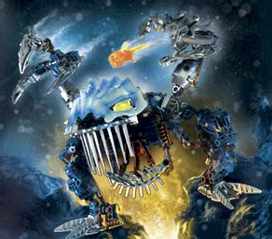 Gadunka was once a tiny marine creature, no real threat to anything except small fish. Exposure to the energies of the Mask of Life caused him to grow to enormous size. Wild, vicious, and strong enough to bite boulders in half with his powerful jaws, he was a serious threat to the success of the Toa Mahri's mission. His weapon was a Cordak blaster [sic, squid launcher]. His natural tools were claws and teeth. Gadunka had no idea what the Mask of Life really was – he just remembered using it for shelter, and so believed that it belonged to him.1

Gadunka were a breed of tiny sea Rahi not much longer than the length of a finger.2

One Gadunka specimen in particular once hid beneath the Kanohi Ignika for refuge and grew to millions of times its size when it was exposed to the power that was leaking out of the damaged mask. This giant, vicious Gadunka became a serious threat to the Toa Mahri.2

Gadunka had sharp claws and large metallic teeth. They were impervious to most physical attacks and did not have big enough brains to be badly affected by mental attacks.2

Gadunka was once a tiny sea creature. He was accidentally exposed to the power of the Mask of Life, and both his size and strength vastly increased as a result. Gadunka's major natural weapons were its long, sharp teeth. The Mask of Life later reversed what it had done and shrank Gadunka back to what it had been. It was later eaten by a Takea shark.3

The only difference in Gadunka's transformation was its size.4

Gadunka wasn't among the strongest Rahi.5