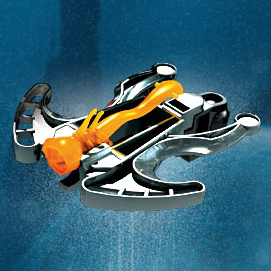 Kalmah created mechanical launchers that could be used to hurl sea squid swiftly at a target. All six Barraki carried these launchers.1

When a squid attacked a target, it drained the target's life energy. Each Barraki had added a special feature to his armor that allowed him to clip living squid on and carry them as ammunition.2

Kalmah designed a mechanical launcher which could be used to hurl sea squids at enemies. All six Barraki came to carry this weapon.3

Squid launchers were used to send the sea squid in a particular direction at a greater speed than they could swim on their own.4

Squid Launchers were made of scavenged materials from the bottom of the sea.6

Squid launchers weren't used as last resorts, they were used to avoid hand to hand combat.7

The same squid could be fired multiple times.8

Launched squid were either retrieved by Kalmah or left to wander and feed or get killed by larger sea predators.9