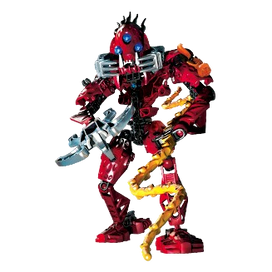 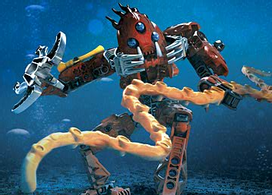 Kalmah was one of the six Barraki. He possessed one powerful tentacle and carried a squid launcher. Tentacles on the back of his head allowed him to sense movement behind him. He led an army of giant squid.2

Kalmah was the silent killer. He was stronger than he was fast but able to glide silently through the water and seize and squeeze prey to death in his tentacle. Five smaller tentacles on the back of his head let him sense motion behind him. He had three eyes, but one was blind due to a disastrous past encounter with Pridak. He was highly intelligent. He bred the sea squid the Barraki used in their launcher, making sure they were kept half-starved and vicious so they were ready for prey. He led an army of giant squid. His weapon was a squid launcher. His natural tools were a tentacle and sensory tentacles. He had no powers.3

Kalmah was always willing to reach out a tentacle and embrace a stranger, be he friend or foe – and squeeze, and squeeze. Utterly ruthless, he was in charge of breeding the vampiric squid and turning them into living weapons for the Barraki. His weapon was a squid launcher, and his natural tool was a tentacle.1

Kalmah frequently visited the Octo Cave to tend to his sea squid.4

Kalmah was a three-eyed (with one blind), squid-like member of the Barraki. Cool-headed and calculating, Kalmah was ruthless in getting what he wanted. He had no loyalty to Pridak.5

Kalmah's weapon was a tentacle, not a whip.6

Kalmah was the caretaker and overseer of the squid population.7

Besides being the first to find them, Kalmah had no extra connection to the sea squid.8

Kalmah probably had the best aim out of the Barraki.10

Kalmah could use his sensory tentacles to detect things behind him pretty well. He sensed movement in the water.13

Kalmah was able to become the "alpha male" of the giant squid despite their size because he was smarter and nastier than they were and they respected that.14

"We shared our victories ... and we shared our punishment," said Kalmah. "So we will share this mask as well, until we see if it can do all that you claim."3