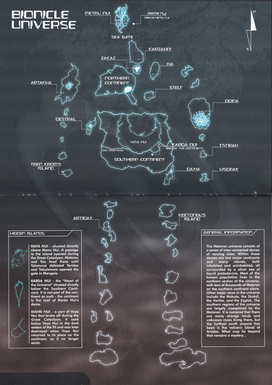 The Matoran universe was an artificial world inhabited by biomechanical beings that existed inside the colossal robotic body of Mata Nui. Its intended purpose was to provide a self-sustaining maintenance system for Mata Nui, facilitating his appointed mission of space exploration. The civilizations of beings living inside of Mata Nui's body were unaware that they inhabited an artificial world comprising Mata Nui's body, but instead misunderstood the interior of his body to be the limits of their universe. The Matoran universe consisted of a series of interconnected, roughly dome-shaped cavities within Mata Nui's body and contained a large number of landmasses – mostly islands, but including two large continents – resting in seas that extended to the edges of the domes. Artificial gravity, skies, weather, plant life, light sources, and day-night cycles gave those living inside the domes the impression that they were on the surface of an ordinary planet, though with dimmer light than that of a real sun. The surfaces of these lands pointed toward the ventral side of Mata Nui's body, with artificial gravity pulling toward his dorsal side. Mata Nui's head was considered to be the northernmost point of the Matoran universe.

When the Piraka emerged on the surface of Mata Nui, to them the sunlight seemed incredibly bright and hot, and the sky impossibly blue. The air was also fresher than they were used to.1

Helryx once said that the Energized Protodermis Entity had helped create beings that had brought terror and death to thousands, which implies something about the Matoran universe's population.2

When the Great Spirit was awakened, a sudden change was felt in Metru Nui. The stars brightened overhead, the breeze turned warm, and the earth shook in a gentle tremor. Somehow, Hahli was certain that the Great Spirit had awakened.2

Brutaka claimed that Teridax put "millions of lives" at risk with his plan.3

Mata Nui's body was the universe in which the Toa, etc. lived.3

The Matoran universe consisted of a series of inter-connected domes of varying sizes. Within those domes were two major continents and many islands, both inhabited and uninhabited, all surrounded by a silver sea of liquid protodermis. Most of the known population lived in the northern section of the universe, with tens of thousands of Matoran on the southern continent alone. Other major races included the Makuta, the Skakdi, the Vortixx, and the Zyglak. The southern regions of the universe were largely unexplored by the Matoran. It was rumored that there were many strange lands and unknown races living there, but the farthest south anyone had ever been was the volcanic island of Artidax. Whatever lay beyond it was a mystery.4

Makuta Teridax, who had been to the places no one else had ever seen, knew the ultimate truth: that Mata Nui did not rule the universe of the Matoran, but in fact was the universe. The Great Spirit was a vast being of metal, a thing of armored power, within whom dwelled the Toa, Matoran, Makuta, Vortixx, Skakdi, Zyglak, and every other species. The land masses they dwelled upon were but parts of Mata Nui's substance, existing to keep him functioning. They had looked to the heavens for their Great Spirit, when he was truly all around them.5

Most species were created by Mata Nui.6

The inhabitants of Spherus Magna were the Great Beings' inspiration when they designed the Matoran and other creatures of the Matoran universe.8

The artificial intelligence of Mata Nui and the inhabitants of the Matoran universe turned out to be better than the Great Beings knew or planned for it to be.10

Mata Nui was supposed to be a self-sustaining system, and certain individuals played very important roles in maintaining it. In addition, it necessarily had finite resources for producing new beings to replace any lost in accidents or other circumstances. The red star was designed to address this problem. A being who died inside Mata Nui would be teleported to the red star, where its essence would be transplanted into another body, and it would be sent back. Unfortunately, as with so many things related to Mata Nui's construction, it did not work very well. Teleportation to the red star worked, but teleporting back did not. As a result, a lot of newly revived dead beings were stuck on the satellite with no way to get back home.11

When a being died, its body was teleported up to the red star. For this reason, there were no graveyards in the Matoran universe. Then, either the body was repaired, or a new one was made to house the being's consciousness. However, if a being's body was utterly destroyed, the red star had nothing to work with, and the being would not be revived.11

Fulfilling one's destiny did not preclude someone from being revived. The red star was meant to address the fact that not even Mata Nui could be self-sustaining if he lost too many beings (e.g. to an accident). In the same way, a person could not survive if he lost too many blood cells without replacing them.11

Rahi could be revived, since they played a role in Mata Nui's functioning as well.11

The red star did not discriminate when it came to which beings it revived. It worked for all dead beings with an intact body, as everyone had some role to play in the universe.11

Whenever the body of a dead being disappeared, the inhabitants of the Matoran universe interpreted this as meaning that the deceased was becoming one with the Great Spirit.12

A being's pattern, the information necessary to revive them, was stored not only in the red star but also somewhere in the Matoran universe, since they were created there.12

The Matoran, Turaga, etc. living in the Matoran universe were not aware they were living inside a giant robot. To them, it was simply their universe.13

When the Great Beings designed and created the Matoran universe, they did not see its inhabitants as feeling individuals, as they were never supposed to have emotions. They simply saw them as technology running their giant robot.14

There were no wheels in the Matoran universe.16, 17

The Matoran Universe had no pencils or paper.18

The Matoran Universe had at least one main continent.19

If Mata Nui died, the universe would die with him.20

In the Matoran universe, news traveled between Matoran populations mainly by ship through traders.21

When the Great Spirit Robot was submerged on its back, Metru Nui and the Southern Continent were at the same depth.22

Many Matoran islands ended with "Nui" while islands populated by other species did not.23

There were various lands of Matoran, each with their own Turaga.24

Beings could travel between "domes" by sea.25

If the Matoran universe were to die, all pocket dimensions would die with it.26

Beings in the Matoran universe wrote on tablets. They did not have access to paper or ink.27

The only known method of telecommunication in the Matoran universe was the large television screens seen in Metru Nui.28

Metru Nui was not the only city.29

Each region had a Makuta that protected it.30

Sea water in some places was very corrosive.31

There was a place within the universe that had corrosive water.32

There were other islands in the region that contained Zakaz.33

Most Matoran settlements were not set up so that all Matoran lived in one village with a Turaga who matched their element. That happened on Mata Nui because of the district setup on Metru Nui and the fact that there were six Turaga. Most Matoran cities were like Metru Nui, with only one Turaga.34

It is possible that there were diseases in the Matoran Universe.36