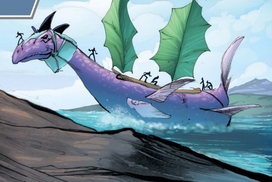 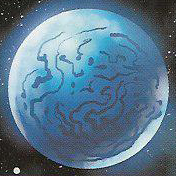 The ShatteringRestored by Mata Nui

Aqua Magna, also called the Great Sea, was a large ocean that encompassed a significant portion of the planet Spherus Magna's southern region. During the Shattering, when Spherus Magna split into three planetary bodies, the Aqua Magna region was separated into its own distinct planetary body and became a moon orbiting the largest of the three, Bara Magna. The resulting moon, also called Aqua Magna, was covered entirely in water and was devoid of landmasses, home only to some of the surviving marine life native to the Aqua Magna region.

Thousands of years after the Shattering, the colossal Mata Nui robot crash-landed on the surface of Aqua Magna, where Mata Nui remained unconscious for a thousand years, with all but his face hidden under its waters. Just after Mata Nui's crash-landing, the island of Mata Nui formed over his face and hid it, and the island of Voya Nui surfaced from inside his chest, becoming the only two landmasses to exist on Aqua Magna. The breach in Mata Nui's chest left behind by Voya Nui emitted radiation from Karda Nui that reacted with the nearby ocean water, creating a mutagen that caused those exposed to mutate into water-breathing creatures. This mutagen was present in the waters of the Pit, Mahri Nui, and Voya Nui.

The Mata Nui robot was eventually awakened and left Aqua Magna for outer space. During the final battle between Mata Nui and Makuta Teridax, Aqua Magna was re-united with Bara Magna and Bota Magna, making Spherus Magna whole, with the ocean of Aqua Magna forming its southern region, once again.

In the Melding alternate universe, the Great Beings knew Spherus Magna better than anyone, from the Great Sea to the Northern Frost.1

Aqua Magna was a planet.2

Energized protodermis leaked from the core of Spherus Magna and triggered a massive explosion that flung two huge chunks into orbit. These became the jungle moon of Bota Magna and the ocean world of Aqua Magna.3

Before the Core War, living vessels sailed the great ocean. Riders could be seen riding atop a large sea creature.4

There was no intelligent life living in the ocean before Mata Nui crashed in it.5

After the Shattering, no Agori or Glatorian lived on Aqua Magna, since there was no land for them to live on, other than the "pilots" of the Matoran universe.6

The chemical composition of water on Aqua Magna was unknown, but it at least had identical properties to H2O.7

The water on Aqua Magna may well have been H2O as it acted the same way.8

The Great Beings did not create Aqua Magna.9