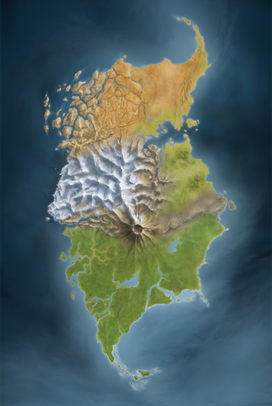 Mata Nui was an island named in honor of the Great Spirit Mata Nui by Turaga Vakama.1, 2 It resided in an unnamed sea and was home to the Matoran. The Matoran constructed six Koro here, as well as the Kini-Nui and other landmarks. Rahi traveled from Metru Nui to this island. The Bohrok in particular did severe damage to the villages and natural terrain of Mata Nui.2

After the Bohrok swarm attacks, there were enormous areas of bare earth, charred rock, and other damage on Mata Nui.3

Mata Nui was a lush, tropical island. A river ran from the temple pond at the Kini-Nui around the base of the Mangai volcano in the direction of Ta-Koro.4

Mata Nui had no significant sources of liquid protodermis.8

When the Piraka emerged on the surface of Mata Nui, to them the sunlight seemed incredibly bright and hot, and the sky impossibly blue. The air was also fresher than they were used to.9

When the Matoran lived on Mata Nui, unlike on Metru Nui, new Matoran could not come into being.10

To the Matoran who lived on Mata Nui for over 1,000 years, it seemed a paradise. Despite the presence of dangerous Rahi and unpredictable weather, the Matoran thrived amid its lush jungles, sparkling rivers, snowcapped peaks, and vast, barren plains.11

No one was ever meant to live on Mata Nui. The Matoran faced danger by doing so. It was a place where the Matoran of Metru Nui fled in a time of desperation, and where they were forced to remain.11

The island of Mata Nui was located in the world above the Matoran universe. Mata Nui could be reached by land through myriad tunnels leading up from Metru Nui. These tunnels were originally built to allow the Bohrok to access the island. The Bohrok rested in nests below Mata Nui and Metru Nui, awaiting a signal to awaken. Once they received it, they would proceed to Mata Nui to cleanse it of all rocks, trees, rivers, etc. and reduce it to its original barren state.11

Mata Nui could be reached by sea from Voya Nui, but its inhabitants had no knowledge of the existence of Mata Nui, so they never attempted to journey there.11

Mata Nui was divided into six zones, or wahi, each with a distinct terrain and climate: Ko-Wahi, Po-Wahi, Le-Wahi, Ta-Wahi, Ga-Wahi, Onu-Wahi.11 Each wahi was home to a village, or koro, built by the Matoran and their Turaga leaders. The Matoran adapted well to their surroundings, making use of the natural terrain for defense and training some of the Rahi beasts which had migrated to Mata Nui from below.11

Six tribes of Matoran lived on Mata Nui. These were the same Matoran who had once inhabited Metru Nui. In a way, it was a blessing that they did not remember their former lives, since the island was quite different from their original home. Whereas the metru of Metru Nui could world together, the koro of Mata Nui were largely isolated. The Matoran were forced to become self-sufficient hunters, fighters, and builders without the luxury of Toa protectors. Consequently, they were among the most unique Matoran in the Matoran universe; far more than simple workers, they were a strong people willing to fight against the darkness.11

Mata Nui was surrounded by a saltwater ocean, the same ocean which surrounded Voya Nui and Mahri Nui.12

The city of Metru Nui rested inside a huge dome. The place that came to be called "Mata Nui" was on the outer surface of that dome, surrounded by a vast ocean. The Toa Metru named it Mata Nui after the Great Spirit. Originally, the island was completely barren. During the terrible earthquakes triggered by Makuta, a leak of energized protodermis caused incredibly rapid growth. By the time the Toa Metru arrived there for the first time, there were great jungles and more on what had once been nothing but rock.13

Metru Nui could be reached from Mata Nui through a series of underground tunnels, which were intended for use by the Bohrok.13

The island of Mata Nui was situated directly above Metru Nui at the northern end of the Matoran universe. A passage to the island opened during the Great Cataclysm. Matoran and Toa lived there until Takanuva defeated Teridax and Takutanuva opened the gate in Mangaia.14

There were thousands of Matoran living on Mata Nui who came from Metru Nui (this is a retcon of the 1,000 number).15

Mata Nui had seasons to the extent that, say, Hawaii has seasons.16, 17

Mata Nui was shaped like Metru Nui because that was the template Mata Nui's system had for creating the shape of an island.18

The Matoran and Turaga had enough trouble surviving on Mata Nui that they did not make time to explore far from Mata Nui.19

For the most part, Matoran did not commit crimes on Mata Nui. The tribes were relatively small and in a constant state of war with Makuta, so it was rare for someone to act in a way that harmed the welfare of the tribe.20

There were no organic animals on Mata Nui [sic].21

No new Matoran ever came into being on Mata Nui.22

The Matoran on Mata Nui did not have computer technology.23

There were multiple passages out of Metru Nui to Mata Nui, but all of them were blocked by Makuta. As long as he was active, they were impossible to get through. After Takanuva defeated him in his lair, the Toa Nuva were able to tunnel out to return to the surface.24

The Koro had relatively equal populations.25

All koro had their own defense forces because they had to.26

Onu-Matoran dug tunnels that extended to other villages, but they did not mine beneath them.27

Traveling from the island of Mata Nui to Voya Nui by boat would take several days.28

Voya Nui could not be reached from Mata Nui by boat. A canister trip would take days.29

Voya Nui was many miles south of the island of Mata Nui.30

Mata Nui did not float, it was part of a larger landmass which was underwater. The dome surrounding Metru Nui was part of this landmass.31

No species were native to the island of Mata Nui.32

The plant life on Mata Nui was made from protodermis.33

Since the Matoran on the island ate foods like fish and fruit rather than absorbing energy from specific locations within the Matoran universe, they had to eat more often.34

No important information was hidden on Mata Nui because nobody lived there besides the Matoran, who didn't know anything.36

Nobody was intended to live on the surface.37

It was impossible for more Matoran to come into existence on Mata Nui, but it was possible elsewhere.38

The island of Mata Nui was meant as a landing spot for the Toa Mata's canisters so they could make their way through Kini-Nui back to Metru Nui because transportation directly to Metru Nui might be risky in the case that the Great Spirit had been severely attacked.39

The island of Mata Nui served as a landing spot for the Toa Mata, but that was not the reason it existed. Its purpose was to house Metru Nui, the same way an eggshell existed to house the yolk.40