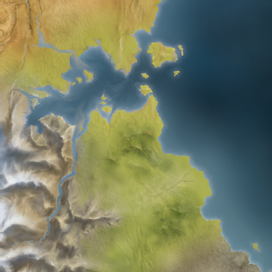 Ga-Wahi was a region in northeastern Mata Nui and the site of Ga-Koro. It was dominated by the waters of Naho Bay and was home to numerous aquatic Rahi, including Ruki, Makuta fish, Tarakava, and Takea.1

Another world existed far beneath the waters of Mata Nui. Here schools of fish congregated around protodermis reefs, feeding on the microscopic organisms that dwelled within. Then, without warning, the school would compress itself into a tight cluster, in a desperate attempt to defend against a Takea shark on the hunt. A couple of passes and the cluster was shattered, fish darting every which way in a race for safety.2

Ga-Wahi was a region in northeastern Mata Nui dominated by the waters of Naho Bay.3

Ga-Wahi was a watery area, home to Naho Bay and numerous species of marine life. It was the site of the village of Ga-Koro.4