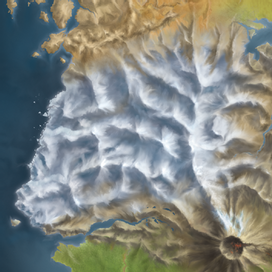 Ko-Wahi was an icy region on Mata Nui that encompassed Mount Ihu and the Drifts. The village of Ko-Koro was located here. Snowfall and avalanches were common here.1

Kopaka, Toa of Ice, and his people inhabited the frozen wilderness of Mount Ihu. This area was dotted with ice bridges built by the Matoran in honor of Kopaka.2

An area of cold, rocky plains lay between Ko-Wahi and Le-Wahi.3

Ko-Wahi was an icy region known for its snowfalls and avalanches. It was the site of Mount Ihu, the highest point on the island.4

Ko-Wahi was a cold, icy land, known for its many snowfalls and avalanches. It was the site of the village of Ko-Koro and Mata Nui's highest point, Mount Ihu.5