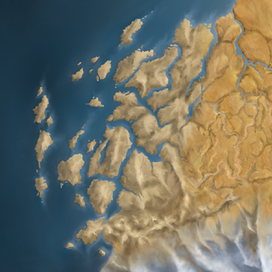 Onu-Wahi was a largely barren region in northwestern Mata Nui. On the surface, it appeared to be uninhabited except for the occasional Rahi. In the tunnels beneath the surface was the thriving village of Onu-Koro. Subterranean tunnels linked Onu-Wahi to other regions.1

Onu-Wahi consisted of caves and tunnels. The network of underground passageways lay beneath much of Mata Nui.2

Onu-Wahi was a largely barren region in the northwestern section of Mata Nui. Although the area appeared uninhabited, the thriving village of Onu-Koro could be found underground there.4