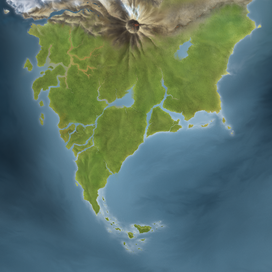 Le-Wahi was a marshy, overgrown region located on the southern end of Mata Nui, known for its thick jungle. Le-Wahi was the site of the village of Le-Koro and home to numerous Rahi such as Brakas and Gukko. Le-Matoran lived in the trees above the Fau Swamp. It suffered badly from the Lehvak during the Bohrok invasion.1

An area of cold, rocky plains lay between Ko-Wahi and Le-Wahi.2

Of all the regions of Mata Nui, Le-Wahi was easily the most difficult to travel through. The air was heavy with rain, and the ground was mostly mud. The farther one went into the heart of the wahi, the denser the jungle growth became. Even for Toa, hacking through vines every step of the way was exhausting.3

Le-Wahi was a region of thick, green jungle and fetid swamps.4

Le-Wahi was a marshy land known for its thick jungle and the treacherous Fau Swamp. It was the site of the village of Le-Koro.5