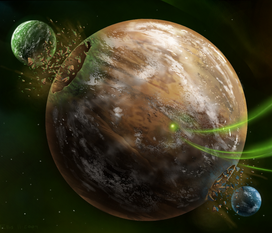 During the Core War, the Great Beings were shocked to learn that the powerful, silvery liquid springing from the core of the planet was so powerful and unstable that efforts to drain it from the planet itself would cause an explosion that would shatter Spherus Magna. As the mammoth mechanical being called Mata Nui rocketed into space, the actions of the Element Lords brought final disaster. A chain reaction began in the core of the world which built in strength until the planet could not contain its force. An explosion tore Spherus Magna into three pieces. This event was known as the Shattering. Thousands died in the disaster and chaos that followed. The liquid from the core dissipated into space.1