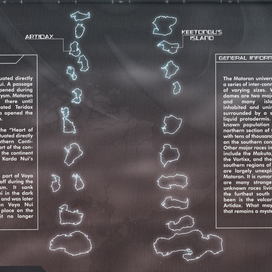 The southern lands of the Matoran Universe were uninhabited and desolate. They were known to be inhabited by stone rats and the original lohrak at the time of the formation of the League of Six Kingdoms.1

During his hiatus, Lesovikk visited and explored the unknown lands far to the south.2

The southern edge of the Matoran universe contained lands so dangerous that even Makuta never dared to travel to them.3 The southern islands were unexplored and full of dangerous Rahi.4

The southern regions of the universe were largely unexplored by the Matoran. It was rumored that there were many strange lands and unknown races living there, but the farthest south anyone had ever been was the volcanic island of Artidax. Whatever lay beyond was a mystery.5