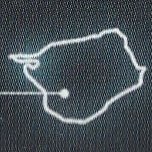 Tren Krom's island was located at the end of the western arm of the Matoran universe. It was the sixth and final island in a chain of islands starting in the north with Artakha and running south.1

Brutaka and his team reached the island after veering away from Zakaz and heading south by sea. The island was little more than a piece of barren rock. The island looked different then from when Mutran visited it. There was a cave, in which Tren Krom resided.2