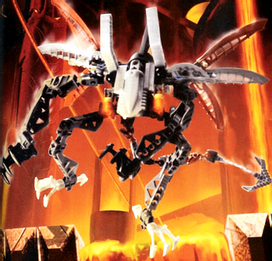 Furnace salamanders were lizard-like Rahi which lived inside the foundries and furnaces of Ta-Metru. They were excellent climbers and jumpers and could glide short distances.1

Furnace salamanders lived in the dark crevices in the foundries and forges of Ta-Metru. They were reclusive and were rarely seen by the Matoran who lived and worked there. They had long, powerful limbs which let them jump great distances and scamper quickly across open ground. Their sharp claws helped them cling to just about any surface, even the searingly hot walls of the furnaces. Furnace salamanders could also glide short distances, using their spiny wings and long, flexible tails to provide precise flight control. They were roughly the same size as a Toa when standing erect, and they tended to move in a hunched position that belied their strength and size. Despite their fearsome appearance, they were not hostile unless provoked. When angered, they banded together and attacked in a swarm, easily overwhelming larger foes. One Matoran who survived such an incident described their bite as feeling like "a thousand red-hot needles." Furnace salamanders were never alone and spent their entire lives among their nest-mates.2

With so many of Ta-Metru's furnaces no longer operating after the Great Cataclysm, furnace salamanders came to dwell atop the molten protodermis pipes that lined Ta-Metru.2

Norik remarked that one needed patience, a quiet step, and bravery to catch a furnace salamander, since the creatures were never found alone and would readily defend each other.2