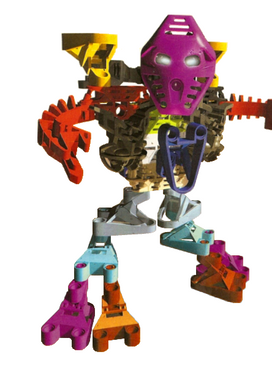 A Matoran Nui was a being formed by the merging of six Matoran.1 Six Matoran, one from each village, were capable of merging into a Matoran Nui.2

The Matoran Nui formed by Jala, Huki, Onepu, Kongu, Matoro, and Maku was strong enough to hurl a Nui-Jaga into the distance. However, the experience of merging was exhausting for the Matoran, and their combined form could last only mere moments before needing to split apart again.3

Tehutti knew how to form a Matoran Nui based on something he once saw in the Archives. The six Matoran would join hands and concentrate on their unity. Soon a glow would surround them, and their bodies would become hazy and indistinct. There was a sudden, bright burst of light, and afterwards the Matoran Nui would appear. The Matoran Nui spoke in a voice that sounded like a combination of those of the six Matoran. The Matoran Nui had considerable speed and strength, able to demolish a door with a single blow. After a short time, the Matoran split apart again, exhausted from the experience.4

Any six Matoran could form a Matoran Nui as long as they were all of different elements.5

Matoran Nui had no elemental abilities.6