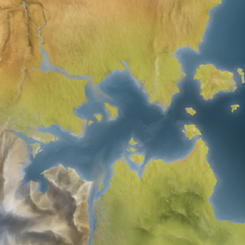 Naho Bay, also known as Lake Naho or Gali's Bay1, was a large body of water in Ga-Wahi and the site of Ga-Koro. Unknown to the Matoran, it covered one of the two openings in the surface of Mata Nui which once served as the suns of Metru Nui.2

It was also called Lake Naho.3

Gali's Bay had bright blue waters. Schools of Makuta fish could be found there. Ruki fish could be seen darting everywhere. Lone Tarakava could also be found lurking close to the shore.1