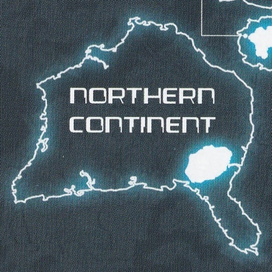 The section of the southern [sic, northern] continent that included the fearsome Tren Krom Peninsula was one of the most dangerous and difficult areas to rule. Gorast had purposely chosen to oversee this region for this reason. She alone had dared to challenge the acid falls and done battle with the monstrous creations of Tren Krom himself. Gorast demanded total obedience from those in her domain, and there was only one punishment for those who failed to comply: death. As a result, Mutran and Chirox found they could often find volunteers for their experiments from her region, as the inhabitants would do anything to get away from her. This stopped when Gorast destroyed Chirox's lab on Destral and threatened to do the same to him.1