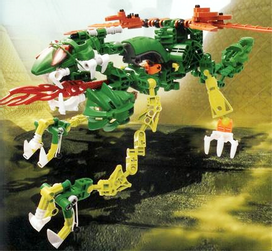 The phase dragon was a breed of flying reptilian Rahi on Metru Nui. They were known for their great speed and ability to alter their density so as to pass unharmed through solid objects. Although frightening in appearance, phase dragons were largely harmless as long as they had vehicles to chase. Once Metru Nui became a dead city, phase dragons became a menace to anything that moved. Phase dragons were never seen on Mata Nui.1

One of the most unusual Rahi found in Metru Nui, these winged, flame-breathing serpents looked frightening – and for good reason. Phase dragons loved speed and used to chase airships through the sky and vehicles speeding along the Le-Metru test track. As of story year 2005, now that the city was largely dead, they pursued anything that moved. Their name came from their uncanny ability to shift to a ghost-like form and "phase" through solid objects.2

Phase dragons were often seen racing through the tangled chutes and cables of Le-Metru. The enigmatic phase dragon was one of the most unusual Rahi found in Metru Nui. They were larger than Toa and were frightening in appearance. They had long, powerful limbs ending in sharp claws and had glistening white fangs which protruded from their mouth. Flames could often be seen shooting from their maw. They moved quickly through the skies with their dark, spiny wings. Despite their terrifying appearance, phrase dragons had a surprisingly gentle personality. They loved speed and were known to chase vehicles and flying Rahi. Phase dragons were often spotted flying alongside Matoran airships. Phase dragons also loved to race vehicles on the Le-Metru test track, where they put their powerful phasing ability to use. Just as a phase dragon was about to strike a hard surface at high speed, it would phase into a ghost-like consistency, allowing it to pass harmlessly through solid objects. Once it passed through an obstacle, it would return to solid form and continue racing. As long as the skies over Le-Metru were filled with airships and the streets with moving vehicles, phase dragons were kept occupied and were no real threat.4

Rahaga Norik observed that, after the Great Cataclysm, with the city of Metru Nui largely dead, the phase dragons grew bored and began chasing anything that moved. They would even charge and attack to get something to run, often misjudging their own strength and doing serious harm.4