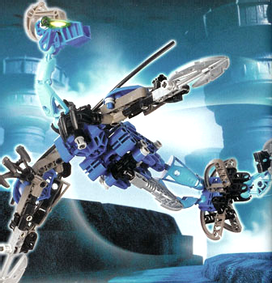 Proto drakes were amphibious creatures found in the waters off Ga-Metru. These creatures got their name from their habit of bathing in molten protodermis, which was believed to be their method of burning off parasites that clung to their skin. The Ga-Matoran regarded them with respect, particularly because they helped to keep coastal areas safe by feeding on sharks. Proto drakes were later spotted off the coast of Ta-Wahi on Mata Nui.2

Proto drakes were amphibious creatures which dwelled in the sea waters near Ga-Metru. They were graceful and powerful. Ga-Matoran always regarded them with respect. Their great fins allowed them to swim at high speeds underwater and to move, more slowly, through the air. They usually preyed on smaller sea creatures, which they grabbed using the claws on the end of their tail. The proto drake got its name not from the fact that it resided in Metru Nui's sea of liquid protodermis, but from its strange habit of bathing in vats of molten protodermis in Ta-Metru. They would occasionally startle Ta-Matoran as they emerged from the molten protodermis. Onu-Matoran believed that proto drakes attracted various parasites while underwater and used the searing hot liquid to burn them off. Proto drakes could seem frightening, but they did not seem to be hostile to Toa or Matoran. Only once did a proto drake attack Ga-Metru, and it was later discovered that the creature had been wounded and in terrible pain. The residents of Ga-Metru traditionally welcomed their presence, since they primarily fed on sharks.3

Rahaga Gaaki remarked that she might not have been as receptive to proto drakes as the Ga-Matoran, given their appearance. Nevertheless, she was determined to capture them for their own protection from the Visorak.3