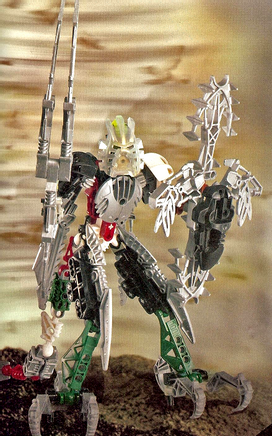 Ravager was an amnesiac Dark Hunter1 known for his destructive nature and stinger tail. His sword and shield were said to increase automatically in strength to match any foe he encountered. Efforts to determine who his true identity or origin were unsuccessful.2

The Shadowed One held Ravager, as he was code-named, in high regard because of his tremendous destructive power and violent nature. His stinger tail had venom which, as the Shadowed One described it, burned like the bites of a million fireflyers. He had ruthless skill with sword and shield. He had very destructive inclinations, always with an impulse to break things apart or kill other living things around him. The Dark Hunters originally found Ravager wandering on a rocky coastline, apparently with no memory of where he came from or who he was. The Shadowed One pressed him hard to try and remember, hoping to have more beings like Ravager under his command. Ravager had tremendous strength and possessed a sword and shield that seemed almost capable of conscious thought. They automatically increased in strength to match any foe or obstacle they encountered. It became obvious early on that Ravager reacted to inactivity by destroying his surroundings. For this reason, the Shadowed One kept Ravager on active mission duty constantly and never allowed him back on Odina.3

If Ravager had a mask power he could use, it would have been in his description in the Shadowed One's records.4