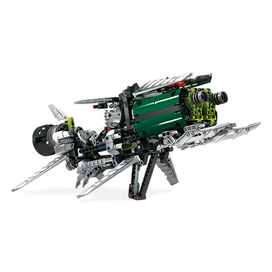 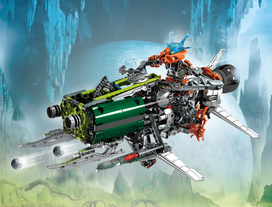 The Rockoh T3, piloted by Pohatu, was designed for both strength and speed. Its combination power dive and ram attack could be devastating, even against multiple enemies. Highly maneuverable, it could swerve in and around the huge trees in the Karda Nui swamp – or smash right through them.2, 3 It featured protosteel armor, retractable wings, a blaster cannon, and a T3 engine capable of 2.5 million pounds of thrust.2

It had a reinforced body for ramming, a "smart" cockpit, protosteel armor, retractable wings, and a T3 engine with a maximum of 2.5 million pounds of thrust. While piloting the Rockoh T3, Pohatu Nuva's Kanohi mask had a targeting heads-up display.3

The Rockoh T3 was faster than the Axalara T9, although it packed much less of a punch.4

The Rockoh T3 was built by Artakha when the universe was new.5

The Rockoh T3 was faster than the Jetrax T6 and Axalara T9 and was built for ramming attacks.6