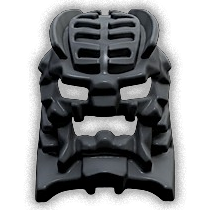 The Kanohi Sanok was the Kanohi Mask of Accuracy. It allowed its user to use virtually any object as a missile weapon and to hit whatever it is aimed at.1

The Kanohi Sanok was the Mask of Accuracy. It allowed its user to hit virtually any target with any object.2

A Sanok user could control the speed at which they threw projectiles.3

The Sanok allowed its users to turn anything they threw, even a pebble or a blade of grass, into a deadly weapon with uncanny aim.4

The Sanok could do significant damage with soft projectiles, but not to the point of making a plush toy as dangerous as a stone.5

The Sanok could probably not sever a chain with a plush projectile.6

The Sanok's ability to turn any object into a projectile was equivalent to the damage that object would do in hurricane-force winds. A piece of straw or grass launched with a Sanok could cut through a chain.7

The Sanok didn't have telekinetic powers, a user would have to physically throw an object to use the mask's powers.8

The Sanok was likely made using disks other than those found in Metru Nui.9